by Compilation from IMF speeches

Former managing director of IMF, Christine Lagarde, has spoken many times on economic resilience and inclusivity. Here are some highlights from her latest speeches on the topic. This was an article features in In Focus magazine issue 5.

During the opening remark at the World Economic Outlook Conference in January 2019, former managing director of the IMF, Christine Lagarde likened the world economy to a cross-country skier: the skier was moving at a relatively high speed the previous year but now the slope’s changing and pointing slightly uphill. Although it’s still a good trail to be on but it’s harder to keep up the momentum.

Basically, after a strong growth in the past two years, the world economy is going through a slower growth rate than expected and, ‘even as the world economy continues to move ahead, it’s facing significantly higher risks [and] some of them [are] related to policy’, Lagarde continued during her address. ‘These risks are now increasingly intertwined: think of how higher tariffs and rising uncertainty over future trade policy fed into lower asset prices and higher market volatility. This in turn contributed to tightening financial conditions, including for advanced economies, which is a major risk factor in a world of high debt burdens.’

Could this be forecasting a recession? Lagarde had voiced a firm no, ‘but the risk of a sharper decline in global growth has certainly increased. Add to this geopolitical worries and disappointing long-term growth prospects, and you have an economic picture with a clear message: address remaining vulnerabilities and be ready if a serious slowdown were to materialise. For most countries, this means harnessing the existing growth momentum to create more policy room to act.’ The goal, according to Lagarde, was to make economies more resilient as well as more inclusive, and to increase collaboration. 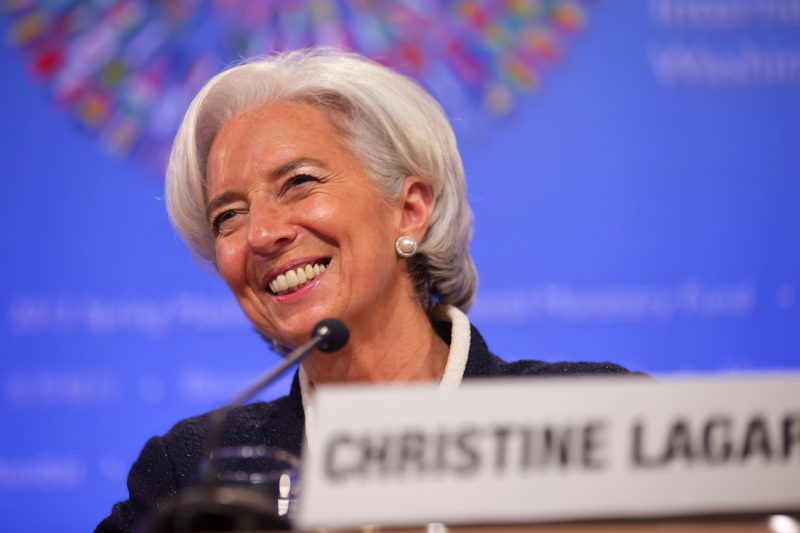 During an address on IMF’s approach to social spending in June 2019, Lagarde acknowledged how, ‘for economies to be resilient and growth to be sustainable, this growth needs to be inclusive – which calls for social spending. This in turn provides the social and political buy-in for growth-supporting policies and in doing so, builds trust.’

The bottom line, Lagarde believed, was that social spending matters, especially today, because of several reasons: new challenges, more retirees which spells fewer workers, technological effects on work and wages, increasing inequality and demands for greater fairness, challenges women face to participate in the economy and realise their full potential, existential threat of climate change, diminishing trust, rising discontent, and a turn away from global cooperation.

‘There’s no simple policy response to these complex challenges,’ Lagarde admitted during the address on IMF’s approach to social spending. ‘Yet, while social spending isn’t the only lever in such a response, it’s undoubtedly one of the most important. It’s no surprise that surveys indicate rising public support for income redistribution policies in many countries. Social spending must therefore take its rightful place at the centre of macroeconomic policy discussions.’

Lagarde made it clear that social spending wasn’t just an expense, ‘but rather the wisest of investments in the well-being of societies. Expansion of access to education and health generates broader productivity gains across the population, allowing all citizens to flourish. To reap the rewards of a stronger global economy tomorrow, we must begin by strengthening social programs today.’ However, Lagarde admitted that in reality, the best of intentions run up against the firmest budget constraints.

How, then, should we proceed? ‘We must start from the premise that social spending needs to be adequate, yet also efficient and financed sustainably. Spending adequacy. Spending efficiency. Fiscal sustainability. These are the yardsticks we’ll use to assess the “macro-criticality” of social spending,’ Lagarde responded. ‘Of course, there’s no one-size-fits-all when it comes to designing social spending programs to reduce poverty, boost inclusion, and protect vulnerable households. Countries have different preferences, face different challenges, and hold different long-term aspirations. But by working together, we can ask the right questions and hopefully find the right answers.’

In a nutshell, Lagarde reminded that everyone has an obligation to the poor and vulnerable, to those facing financial insecurity and poor health, to those left behind with few opportunities, including women and girls, and to future generations. ‘We have an obligation to help countries achieve the Sustainable Development Goals by 2030,’ she concluded. ‘This isn’t just ethically right, it is [also] economically sound.’

Christine Lagarde advises three ways to be ready for an economic slowdown during her opening remark at the 2019 World Economic Outlook Conference.

Resilient. Reducing high government debt would open the space needed to fight future downturns – but this must be done in a fair and growth-friendly way. Monetary policy should be data-dependent and exchange rates should be allowed to act as shock absorbers. Developing macroprudential toolkits will help further financial sector stability. This also remains the time for economic reforms to lift growth, especially in labour markets and infrastructure investment.

Inclusive. If we are to deliver on the promise of the digital revolution – in terms of productivity, employment and long-term growth – then we must make sure it delivers for people. This includes helping workers displaced by automation and creating new and better opportunities for women and young people.

Collaboration. Effective international cooperation comes down to fairness, flexibility and a commitment to the common good. So, let us redouble our efforts to resolve shared problems – from fixing the global trade system, to fighting corruption and tax evasion, to addressing the existential threat of climate change.