Japan’s popular with Muslim tourists. With the Tokyo Olympic Games in 2020, there’ll be more. Halal certification for food is instrumental in encouraging the increase but, as in other countries, there are no standard regulations for it in Japan. Su Aziz writes in an article in the third issue of In Focus magazine.

Tokyo, as you cross the busy cross junction outside Shibuya station, you can’t help but notice a sea of predominantly dark-hair on fair-skinned faces with commonly long narrow eyes or, what the Japanese describe these faces as, shouyugao, misogao or satougao, to name a few. Then, after a blink or two, you’ll spot what is obviously a contrast – the tourist. Chances are, a colourful headscarf has caught your attention and you marvel at how often this happens in the busy streets of Japan’s capital city. It marks the advent of Muslim tourists and in the past few years, Japan has remained on the top of their list of countries to visit. 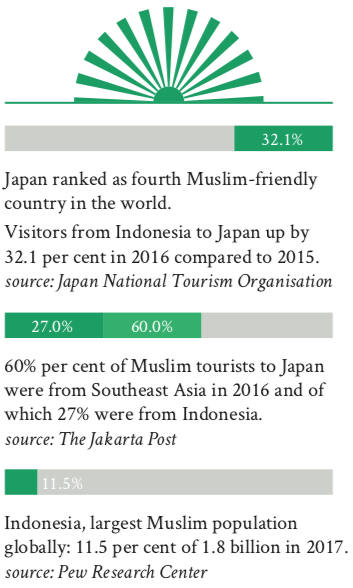 It has been reported that Japan’s popularity among Muslim tourists will increase. The Jakarta Post reports 700,000 Muslim tourists to Japan in 2017, of which 27 per cent were from Indonesia. According to MasterCard-CrescentRating Japan Muslim Travel Index (JMTI) 2017, there’ll be an increase of a million Muslim tourists to Japan in 2018. This is in line with Japan’s aim to increase their tourist numbers to 40 million by 2020, the year of the Olympics in Tokyo. With Muslims making up one-fourth of the world population, it makes sense to appeal to their wanderlust.

In that respect, Halal Media Japan Co., a media company providing Muslim-friendly information such as prayer space, halal food, products and such, contribute to Japan’s popularity with Muslim tourists. ‘We encourage companies and our local government to promote halal products and welcome more Muslim tourists to the country. We’re responsible for giving advice to restaurants and shops on how to approach Muslim customers,’ explains Akihiro Shugo who is the co-founder of Halal Media Japan.

Halal Media Japan was started in 2014 due to the demand for information in English or other languages from Japan, despite the rapid increase of foreign tourists. ‘Besides Muslims making up four to five per cent of tourists to Japan now, immigrants from Muslim countries were also increasing in the country then. Thus, the need for this type of information was urgent and, of course, indispensable,’ Akihiko adds.

Today, Halal Media Japan is a big contributor to the increasing numbers of Muslim-friendly restaurants in the country. ‘We also disseminate exact and valid information to Muslim customers. Thus, making our responsibility quite considerable.’ Seeing the steady increase of Muslim tourists to Japan, it must be doing something right. So, how are the Japanese doing it? Akihiro explains.

First up, Akihiro explains that proper accommodations for the Muslim tourists have to be made. A large number of them are from Indonesia. The Japan National Tourism Organization (JNTO) reported an increase of 32.1 per cent in 2016 of Indonesian tourists to the country, as compared to the year before.

This adds up since Indonesia has the biggest Muslim population in the world at around 209 million out of the 1.8 billion global Muslim population. Globally, Muslims make up or around 24 per cent of the total world population worldwide just two years ago.

What’s more, Muslims were forecasted to grow faster than other global population. Hence, a fast- growing market for halal products and this is reflected in the value of halal products in 2016 of around USD45.3 billion and is expected to grow by around 29 per cent in 2020.

While Muslim tourist numbers increase globally, demand for other Muslim-friendly products is on the rise too. According to Statista, the online statistics, market research and business intelligence portal, halal food had a global market value of approximately USD1.4 trillion in 2017 and this number is expected rise to USD2.6 trillion in 2023.

‘The Japanese people perceive halal as only for Muslims,’ says Akihiko. ‘They also think halal food doesn’t taste as good as non-halal food. But this is changing as there’s more understanding on the matter, today.’ Generally, food in Japan is non- halal. ‘For example, seasoning such as mirin the rice wine which is a key ingredient for teriyaki sauce, is alcohol-based. Also, the Japanese add alcohol to miso or soy sauce, as preservative.’

This is where Media Halal Japan comes in. Akihiko explains, ‘We introduce halal ingredients in Japan such as non-alcoholic seasoning or make available imported halal products in the supermarkets. And tell them how to get these ingredients at a lower cost.’ This is because, generally, halal certified food and products cost more. Hence, their limited availability in Japan.

The Japanese Times reports that currently, there are no set regulations on the issuance of halal certificates for products and facilities in Japan. Standards vary depending on the organisation that issues a certificate. ‘There are no regulators and issuers of halal certificate in Japan’s public sector. The halal certification body is basically a private one and because of this, theoretically, anybody can issue it in Japan,’ confirmed Akihiro. ‘Hence, it’s tough to identity the number of companies that are halal certified in Japan.’

Although, as a rule of thumb to follow, a Malaysian newspaper, The Star, reports that ‘to be halal- certified, products mustn’t contain traces of pork, alcohol or blood, and must be made on factory lines free of contamination risk’.

A few Japanese companies that are halal certified include Yakult, which is a cultured milk drink containing probiotics bacteria. It was certified halal by Jabatan Kemajuan Islam Malaysia (JAKIM) and has a special halal committee to scrutinise every aspect of the halal regulations to ensure that all requirements are stringently adhered to. Then there is Tugba Trading which is a full- pledged trading company that imports and sells Turkish products in Japan such as ice cream, and then there are eateries such as a kebab shop as well as Mrs Istanbul at Haneda Airport Terminal 2 in Tokyo.

Other brands producing edible products that have followed the halal route include Origami Asakusa which is a halal Japanese restaurant in Tokyo serving authentic Japanese dishes and wagyu beef. Also, Yamadaya which is a confectionery company, CoCoICHIBANYA which is a curry rice restaurant chain in Japan and Royal Co. that produces, conveniently, frozen halal bento.

Akihiro believes there should be better, if not stricter guidelines for halal certification globally as well as in Japan. ‘For those who enter into the halal industry, it’s confusing to be surrounded by many regulations for halal certification. But we’re now being Muslim-friendly by disclosing information through a website, halalgourmet.jp. It allows visitors or customers to choose the options relevant to them,’ he says and feels that a unified national halal standard can be achieved in Japan if the public sector announces the regulations for it, officially.

The need for halal certification or at least regulated issuance of halal certification caters to not only tourists but also residents of the country. Akihiko admits that there are no official numbers of the number of Muslims currently living in Japan, ‘It’s because we don’t refer record religion on Japanese identification documents. So, no one has a record of the exact number of Muslims living in Japan but the estimate is between 100,000 and 200,000 and this includes 10,000 to 20,000 of Japanese Muslims.’

Malaysian media reports on the Japanese government is looking to Malaysia, whose halal industry contributes more than 8.5 per cent to its GDP, for expertise and advice to upgrade its own knowledge in the halal segment. This is part of Japan’s extensive preparation for the Tokyo Olympic Games in 2020. It’s when Japan’s expecting an influx of Muslim visitors.

Positive statistics of Muslim tourists to Japan has encouraged its halal industry to improve and progress. Japan’s efforts are very much valued by Muslim tourists. How do we know this? Because it’s ranked as the fourth Muslim-friendly country in the world,’ says Akihiko. The ranking, undoubtedly, has been hard-earned for this industrious non-Muslim country of over 127 million people. Who knows, Japan might just lead the way to standardising halal certification regulations for the rest of the world. ‘Only time will tell,’ concludes Akihiko with a small, knowing smile.

For more opinions and articles on the latest business topics, read our digital versions of In Focus magazine, issue 1,issue 2 and issue 3.