Here, Masumi Hamahira talks about Islamic finance, its way forward post-pandemic and how blockchain can be its key booster. This article first appeared in issue 6 of In Focus magazine.

Most will agree that Islamic finance is the strategic key for Japan’s national interest, even though there are less Muslim people there. But it’s not only Japan, this applies to all non-Muslim countries as well. Why? For example, Japan has limited natural resources such as oil and gas, and this means it can’t maintain current happy life without good relationships with mainly Muslim oil-rich countries. In Japanese tradition, when we respect counter parties, we’re encouraged to follow their culture and best practices. Thus, adopting Islamic finance to maximise harmonisation with project partners and people of those countries, is a good idea.

Moving forward, the global markets are expected to remain resilient despite challenging socioeconomic conditions and the expected consequential impacts from the COVID-19 pandemic. Nevertheless, stimulus packages of various governments were mobilised to revive their respective economies. Infrastructural projects related to renewable energy are seen to be a future driver.

The Way Forward Post-pandemic: Sukuk, ESG and SSL
The appetite for such sustainable projects from global investors is huge and Japanese investors are no exception. Sukuk issuances based on such sustainable infrastructure projects are expected to be one of the preferred modes of funding in the near future. The foregoing breakthrough that enabled sukuk investment by Japanese investors is only one of the wider opportunities seen in the sukuk market.

The door is finally open particularly for Japanese investors in this area by clarification of tax treatment for sukuk investment in Japan. The recent pandemic should be looked into more responsibly by the market to ensure a more sustainable environment is being placed as a priority. Sukuk issuance based on such sustainable objectives to address post-pandemic issues could be the way forward. The involvement of Japanese investors will be a new wave in the Islamic capital market in 2020.

pension funds placing serious emphasis on this, resulting in ESG-based funding strategies. In Japan, ESG financing or funding, such as sustainability-linked loans (SSLs), is attracting a large part of the market. Similarly, Islamic SSLs are gradually gaining traction in the same market moving forward. Recent market sentiment seems to signal SSLs are gaining traction including from Japanese investors and institutions alike.

This development is expected to spur more of such interest in the global market that would paint the landscape for 2020. It’s expected to further drive innovation of Islamic ESG financial offerings such as Islamic SSLs to cater to the initiatives of the UN Sustainable Development Goals. The participation of Japanese investors and financial institutions in this area is expected to be more notable in 2020 and beyond. Islamic Finance is growing up fast and it’s keen on ESG as well as SDGs because they’re in line with its principles.

Islamic Finance in a Digital World
It’s true, Islamic fintech is in vogue. It’s because this is the global direction toward which the industry is moving, and it’s moving fast to incorporate technology such as blockchain and green financing into their strategies. There have been recent developments in Islamic finance market where fintech companies establish Centres of Excellence in relation to AI innovation.

Through the optimisation of Islamic finance with blockchain and AI, customer satisfaction can be enhanced with higher quality service at lower costs. Also, the Islamic finance industry can make further progress in the financial inclusion by optimising micropayments technology under blockchain, for example. Blockchain can lead innovative disruption in Islamic finance.

Therefore, Islamic finance can further reduce administrative cost such as trading fee with application of Atomic Swap. With it, Islamic banks and customers can exchange Central Bank Digital Currency (CBDC) and commodity token at the same time on blockchain without counterparty risk and complicated operation. It’s because there’s no reliance on trusted third party on blockchain in the future.

Blockchain helps commodity murabahah transactions to be shariah compliant more efficiently. An example would be Islamic banks can’t sell a commodity before owning it to comply to shariah. Therefore, they need to organise and record the sequence of the commodity transaction which currently is a manual process. In this matter, blockchain helps with its timestamp function and review process as well, because distributed ledger under blockchain is immutable and traceable.

Still, there are some challenges in the application of such technologies in Islamic finance but they may be overcome through collaboration between the Islamic finance and blockchain sectors. Also, there’s a need for a global standard protocol for blockchain so most people can benefit from blockchain, regardless of where they are.

Best Practice During, and After, a Pandemic
I’d say the best way to better how the world is now, is for both Islamic finance and blockchain industries to work together to come up with beneficial results. The collaborations between the two industries can be the bridge towards a sustainable economy across the globe. 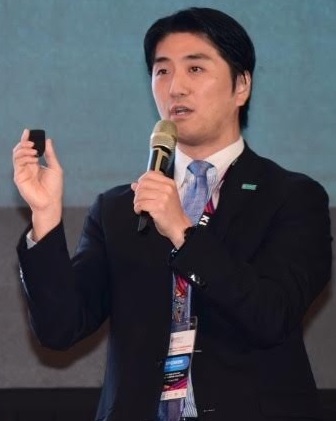 Masumi Hamahira is a Japanese living in Kuala Lumpur, who focuses on Islamic finance and blockchain, and has two decades of experience in banking and finance. He’s the Honorary Treasurer, Grand Council of the Chartered Institute of Islamic Finance Professionals (CIIF). He recently received Global Top 50 Leadership Award 2020 Islamica 500 in Islamic Economy and has been invited as a speaker for global conference of Islamic finance and blockchain in the United States, United Kingdom and Asia.