Boyan Slat founded the Ocean Cleanup foundation at only 21 years old. He developed a technology to rid the ocean of plastic pollution. His V-shaped technology system, which will be deployed this year, is the largest ocean cleanup in history. It’s estimated to clean up half the Great Pacific garbage patch in just five years.

However much we’d like to reduce plastic use and recycle to save the environment, the fact is that much of the plastic is still lurking out there in our oceans. At the age of 21, inventor and entrepreneur, Boyan Slat, founded the Ocean Cleanup foundation in 2013 to help cleanup the world’s oceans from plastic pollution and prevent more from getting in.

The idea of ridding the world’s oceans of plastic pollution had been thought of as a very costly project. But, that didn’t stop Boyan from pursuing his big idea.

In a recent press release by the Ocean Cleanup, these alarming figures were reported to be 16 times higher than previous estimates. It stated that 90 per cent of the mass in the GPGP were large objects while only eight per cent were smaller than five millimetres in size.

Researchers have been doing great work since the 70’s in mapping plastic in the ocean, specifically in the GPGP. However, according to the Ocean Cleanup, more needed to be done to understand the exact scale of the problem.

The inventor and entrepreneur
Boyan began inventing things at the age of 14 when he set a World Guinness Record by launching 213 water rockets simultaneously. But, it wasn’t long before he became aware of the plastic problem. While he was diving in Greece, he realised there were more plastic bags than there were fish. His idea actually started as a high school project to investigate ocean plastic pollution which ended up becoming the foundation for the world’s largest cleanup in history.

One of the reasons this large scale project was deemed impossible was mainly because of the financial costs involved in developing it. That didn’t stop Boyan from thinking of a way around it. His realisation of the increasing need for a massive cleanup project made him understand the opportunity that lied ahead.

During his Aerospace Engineering studies, he found a viable solution for the ocean cleanup. So, he dropped out to focus on developing the project.

Massive funds for massive projects
In 2014, he presented a method to clean half of the GPGP in a 530-page report, authored by 70 scientists and engineers. He also managed to launch a successful crowdfunding campaign which raised over USD2 million from close to 38,000 funders from around the world. 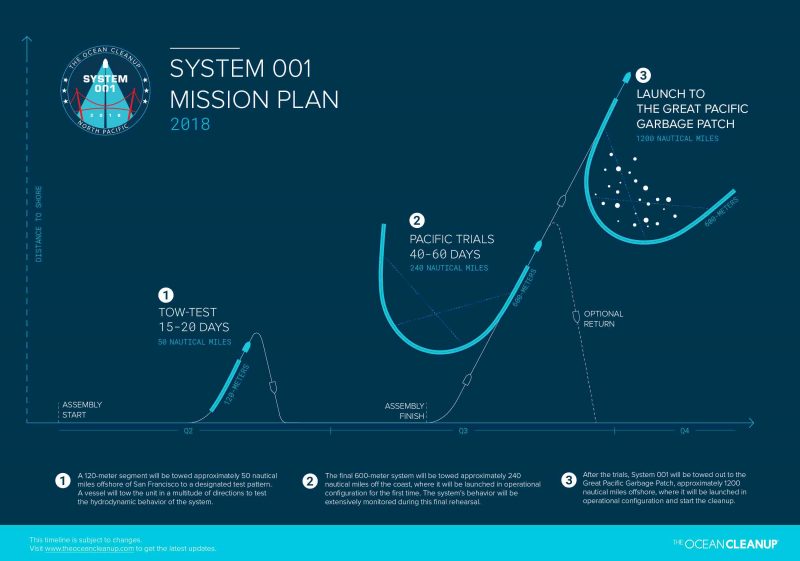 The Ocean Cleanup reported that the fleet had collected a total of 1.2 million plastic samples. Figures from their research result showed to be worse than expected.

The actual operation of cleaning up of the GPGP was scheduled to begin in 2020 and completed in around 10 years. But this year, Boyan announced a change in that schedule and that the system would be deployed to clean the GPGP in 2018. This was earlier than planned due to successful funding which accelerated the production process.

Collaborations
The Ocean Cleanup system used the ocean currents as a way to passively collect and transport plastic through it with extremely long floating screens that will remain in the water. Realising the scale and requirements of implementing such a concept, Boyan sought collaborations and outsourced its fundamental research to institutions and engineering companies.

In 2016, Boyan announced that the first cleanup pilot barrier in Asia will be deployed. The technology itself spanned 2,000 metres which would make it the longest floating structure to be deployed off the coast of Tsushima in South Korea. This structure was scheduled to operate for two years to collect plastic before it reached the shores of Tsushima Island.

In the summer of that year, the Ocean Cleanup also received half a million euro in funding from the Government of the Netherlands to deploy a prototype spanning 100 metre-long in its Dutch North Sea for one year. This was also a way to test how the Ocean Cleanup’s system stands the extreme weather. Boyan estimated a 30 per cent chance that the system would break but that it would be a good test since the system would also have to face those harsh weather conditions in the GPGP.

Launching soon
The Ocean Cleanup is scheduled to officially launch the world’s first cleanup system by the end of this year. It’s expected to collect debris emptied by garbage trucks of the oceans every month.

After the cleaning, the plastic gathered will be sent for recycling to create durable products. Though the cleaning of the ocean is just part of the solution, Boyan believes there’s more that everyone should do to prevent plastic from getting there in the first place.