This technology known as TaqwaTech represents a new wave of startups which focuses on serving Muslim consumers, communities and businesses are disrupting conventional business models in a good way.

Apart from disrupting the way we connect with other people or businesses, Google, Amazon and Facebook represent part of the world’s top 10 most valuable companies. As the digital revolution continues to disrupt conventional business models – think what AirBnb does to the travel industry, what Uber and Grab do to the transport industry as well as what Netflix and Iflix continue to do to the movie industry – slowly but surely, we’re in the midst of witnessing the emergence of a new sector called TaqwaTech.

‘A lot of people don’t realise how big that market is. It’s a standalone sector where we can cater to countries like Malaysia, Indonesia, even the Middle East, India, Pakistan and Bangladesh,’ 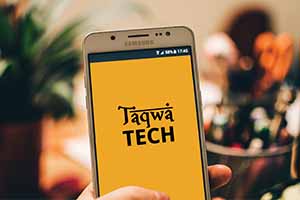 It’s a technology designed to serve Muslim consumers, businesses or communities. In 2015 alone, Thomson Reuters estimated that the entire Islamic economy was worth more than USD1.9 trillion and expected to grow robustly within the coming decades. Its growth was predicted to be progressively fuelled by a young, swelling and discerning Muslim middle class’ demand for products and services that meet their faith-based needs.

‘There’s a big opportunity there [for TaqwaTech]. A lot of people don’t realise how big that market is. It’s a standalone sector where we can cater to countries like Malaysia, Indonesia, even the Middle East, India, Pakistan and Bangladesh,’ says Managing Partner and co-founder of Gobi Partners Thomas Tsao.

Industries it benefits
An upsurge of new Muslim-friendly startups is jostling to capitalise on the growing numbers of middle class Muslims who are now spending more than USD100 billion a year online. While opportunities are aplenty, four key areas within the Islamic economy receive the most attention from digital entrepreneurs: halal food, modest fashion, Islamic finance and Muslim-friendly tourism.

Halal food – The opportunities of the halal food industry lie in its sheer size. Newsweek estimates its value at more than USD1.2 billion in 2015 alone. Besides a myriad of halal certification authorities overlooking the halal food market in specific countries or regions, TaqwaTech entrepreneurs play a significant role in informing and helping consumers find halal or Muslim-friendly eateries. Examples of this sort of app include HalalGems, an app that lists high-end halal restaurants and Halal Touch which is another digital platform that helps consumers verify JAKIM issued halal certifications in Malaysia.
The food delivery scene also shifted to address the demand for the delivery of halal food in both Muslim and Muslim-minority countries. While the largest online food takeout and delivery players like DeliveryHero and FoodPanda have a halal food category, a number of dedicated companies have emerged. To name a few: Singaporean HalalOnClick, British HalalEat and Russian HalalEda. They offer exclusively halal food and thoroughly validate as well as vouch for the halal status of their listed restaurants.

Modest fashion – From H&M’s hijab line, Marks & Spencer’s burkini to Dolce & Gabana’s abaya the Muslim-friendly fashion industry is also experiencing a digital transformation away from brick and mortar businesses. Take Modanisa, a Turkish startup now grown to a multi-billion dollar company with its own international modest fashion week or November Couture that was founded by Malaysian pop star Yuna Zarai that caters to needs of the modest fashion enthusiasts shopping for their desired items at the tip of their fingers. Alongside these modest fashion brands, online retailers like Fashion Valet with over 200 brands and more than 10,000 products from South East Asia have joined the bandwagon and expand their horizon to the rapidly growing base of the online Muslim community.

Islamic finance – The Islamic finance TaqwaTech scene is buzzing with startups that aim to disrupt the traditional banking system and cater to the Muslim consumers at the same time. Salaam Bank’s a mobile first bank that offers diverse and technologically innovative Islamic finance options, with a goal to transcend beyond borders and become a truly global bank. Singaporean Ethis Crowd and Kapital Boost also have a big mission and are taking on the big guys like Kickstarter, Indiegogo and Gofundme with their sharia compliant crowdfunding platforms. In the meantime, Human Crescent by Finocracy focuses on the distribution of zakat which is the Islamic mandatory giving a set portion of one’s wealth to a charity that funds humanitarian projects around the world.

Muslim travel – It’s another significant sector under the TaqwaTech radar, generating USD139 billion in GDP and creating 4.5 million jobs worldwide, according to the Salam Standard Global Economic Impact of Muslim Tourism report 2015/2016. This trend spurs a boom in Muslim-friendly services and applications as entrepreneurs realised that the hospitality industry hasn’t been actively serving Muslim tourists by pushing a one size-fits-all approach.

Hungry travellers appreciate apps like Halal Trip and Have Halal Will Travel that features great halal and Muslim friendly restaurants, while Muslim-friendly accommodation can be booked via Tripfez that lists over 55,000 hotels worldwide. The title of the most downloaded and most reviewed Islamic app in the world goes to Muslim Pro, offering prayer times, qibla direction, Qur’an and other travel essentials with over 30 million installs on android. What’s more, it’s not alone. Salam app by Hajjnet that guides pilgrims to Mecca through the Hajj and Umrah process ranks among the top 10 under travel in the app store across 59 countries.

Last words
The Muslim-centric phenomenon has already gained a lot of momentum and TaqwaTech is not only predicted but also expected to be one of the biggest and most exciting investment trends for the next decade. So, expect an emergence of Muslim entrepreneurs and their new startups focusing on using technology to serve Muslim consumers, businesses or communities.